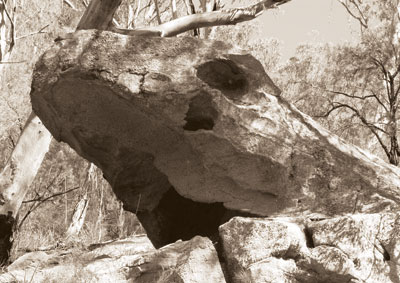 Another Dreaming site in the Hunter Region is that of the often related Tiddalik the Frog story. The story has been published in several different versions, and as with many traditional beliefs there are different levels of understanding depending on the levels of learning one has encountered.

Tiddalik was a giant frog in the Creation era who lived in the Wollombi Valley and was overcome one day by a great thirst. He began to satisfy this thirst by drinking from the Wollombi Brook, but instead of drinking only his fill, he continued to gulp the water, not caring for the needs of others. The result was that he was full to the point where his tummy was near bursting and he could only move a short way away from what had now become an empty, dry stream. The other animals quickly became alarmed at the loss of water and realised that they would have to get Tiddalik to bring some of the water back up. If he didn’t they knew that all the living creatures would die.

They got together and eventually made Tiddalik laugh. In doing so he brought the water back up. All the living creatures could now survive and enjoy life once more. Tiddalik though, was punished for his greed. He was turned into stone and we can visit the site near Wollombi and relive the event. And remember that greed, and neglecting the needs of others, can lead us to suffer in the same way that Tiddalik still does.