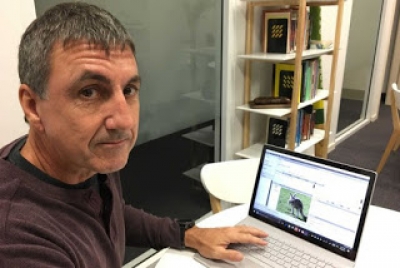 The Miromaa Aboriginal Language and Technology Centre has developed a software program over the past decade to digitise and conserve Aboriginal languages.

The software database incorporates text, photos, video, and audio elements to help educate its users in indigenous words and definitions.

It is being used to help preserve more than 50 different languages from Indigenous Australian tribes, as well as populations native to other countries writes Robert Virtue & Karen Shrosbery.

The organisation and its general manager Daryn McKenny, himself an Awabakal man, were even mentioned by then-US First Lady Michelle Obama at the White House during an awards ceremony in 2016, recognising their work in assisting Native American people preserve their languages.

The importance of language

"A word for us is knowledge; it tells us so much more. That's what's being taken away from us — our power, because we haven't been able to use our words," he said.

"Our words reflect how our world here works, and we can't do that using English words.
"We haven't been able to use our words in the manner which we need, which reflects our thoughts, our feelings, our understandings.

"That richness and that knowledge has been taken away from us as well, because everything else we're doing right at this moment is in someone else's language."

Mr McKenny said some tribal languages were on the verge of extinction.

"The east coast of Australia was one of the hardest-hit places in the world for language loss," he said.

"We have places where they've got maybe a hundred words left, that's it."

The Miromaa language software was developed by Mr McKenny as a way of empowering indigenous people.

"We as Aboriginal people, we as Torres Strait Islanders, we as Native Americans, Native Alaskans … the original people of the lands from all around the world have never really had the opportunity or access to have our own tools to do this work ourselves, to empower us," he said.

"All the previous uses of technology have been aimed at the academics — linguists, anthropologists, other scientists. They're able to develop it and they've got the resources and so forth.

"In 2004, I sat down one night and started making a computer program which eventually evolved to be named using the word miromaa. That word itself means to protect, to save, to stop from loss."

Software being used around the world

Mr McKenny said the software was the only Aboriginal-developed tool to document language, and it was not just being used by Indigenous Australians.

"It's being used all throughout North America, Central America, South America … it's being obtained by people on either side of the Amazon.

Recognition in the White House

In 2013, Miromaa Aboriginal Language and Technology Centre started working with people from the Native American Pomo Tribe in northern California.

Mr McKenny said their language was at high risk of becoming extinct.

"You were scrambling to find one speaker," he said.

"At the end of it, they produced six language apps. They documented as much as they could of the six dialects within the Pomo language group."

Mr McKenny said as a result of the success, the Pomo Tribe participants were recipients of the prestigious US National Arts and Humanities Award for their work.

"It was presented each year by the Obamas, and Michelle Obama presented them with that," he said.

"In that room in the White House, myself and our organisation here was acknowledged for our support and our inspiration in helping them.